Poetry and Song: A Nod to the Dreamers

Posted on March 3, 2013 by stephanielowden

I titled this a Nod to the Dreamers because two books exhibit particularly creative approaches to poetry and one chronicles the roots and meaning of a well-known song. Poets are nothing if not dreamers.

When the little field mice begin storing supplies away for the winter, Frederick seems to be too lazy to help. “Frederick, why don’t you work?” they ask.  “I do work…I gather sun rays for the cold dark winter days.”  And so, as the other mice work feverishly to prepare for winter, Frederick gathers colors—and words.  When winter finally comes and their supplies are running low, the field mice turn to Frederick for the gift only a poet can give.

Lionni’s illustrations will appeal to the youngest child, but the message will resonate with readers of all ages who were ever accused of being too much of a dreamer.  Writers and poets will recognize themselves in Frederick and rejoice when his mice friends credit him for the gift only he could give.

I own the Pinwheel paperback edition of Frederick.  It is dog-eared and well worn—proof of how many times I read it to both of my children.  Every time I re-read it, I’m reminded of the little girl who gazed out the window of her elementary school, day-dreaming, instead of paying attention to the task at hand.  This story will validate every budding poet and writer who, more often than not, feels as if their “gift” is a poor substitute for being the best mathematician or scientist in the class.  This one is for poets and dreamers of any age.

Once I Ate a Pie, by Patricia MacLachlan and Emily MacLachlan Charest; illustrated by Katy Schneider. Harper Collins, New York, 2006.

depict.  There’s Mr. Beefy, the bulldog, who, when he steals people food, likes to eat in private and did, indeed, once eat a pie. There’s Gus, the German Shepherd who wants his people in a group. “Like sheep,” he says. Then there’s Lucy, the shelter dog, who sleeps between her two owners.

The descriptive poetry by the MacLachlan’s that accompanies each dog is beautifully crafted. “Luke” is bound to bring a tear to the eye of anyone who owns an older dog.  “I dream about when I was young. I chased snowflakes in winter. And ran through the grasses in spring..…But now the sun is warm. And I sleep. And dream.”

When I saw this book on the shelf, I knew I had to buy it—for my adult daughter who owns two dogs.  It is indeed a book for all ages of dog lovers, but beware, the youngest child will undoubtedly want a puppy after experiencing the delightful canines in this book.

This Land Is Your Land, words and music by Woody Guthrie; Paintings by Kathy Jakobsen, with a tribute by Pete Seeger.  Little Brown and Company, 1998, New York.

This familiar song never “looked” quite so beautiful.  Jakobsen’s paintings successfully depict the beauty of America, while at the same time illustrating the hard times Woody Guthrie sings about.  This edition includes all of Woody’s verses, some of which are conveniently overlooked when school children sing the song.  Those verses, though, are at the heart of what Woody Guthrie stood for.  The first page that illustrates a devastating time in our history is this one: “W 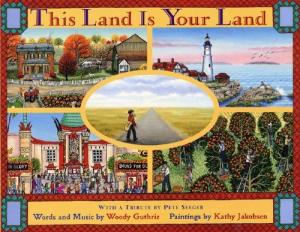 hen the sun came shining, and I was strolling, And the wheat fields waving and the dust clouds rolling…”. The painting shows an idyllic farm with blue skies over head.  But look closer: in the distance is the black cloud of dust so familiar to farmers during the “dust bowl”.  Look even closer and the reader sees a farm wife running to her baby—who just moments ago was playing happily on a blanket outside—to get her indoors.  Father and son rush to the horses to get them in the barn and other family members point to the sky. A lot of history is told in that one double spread painting.

Another verse that is often skipped in elementary school, for obvious reasons, is this one: “As I went walking, I saw a sign there, And on the sign it said, ‘No trespassing.’ But on the other side it didn’t say nothing; That side was made for you and me.”

Woody goes on to describe the relief line of hungry people so common during the depression and asks: “Is this land made for you and me?”

The pages on which the familiar chorus is sung has intricate, detailed pictures children will love to pore over. The first chorus is accompanied by a full page painting of San FranciscoBay. The facing page—New York City with twin towers intact.

Another nice touch is the addition of tiny little squares, almost like post-it notes, that decorate the corners of many pages.  On these little notes are quotes from Woody, some playful like this one: “Left wing, chicken wing, it’s all the same to me.”  Others chronicle the dust bowl: “You could see the dust storm coming/ The cloud looked death–like black/ And through our mighty nation/ it left a dreadful track.”

This book is like a history book. Not the history of wars and battles, but the history of the people of this country: people struggling against nature, hunger and social systems deaf to their needs.  But it is also a celebration of the vast beauty of this nation with its redwoods and wheat fields, mountains and ocean shores.