Posted on December 22, 2013 by stephanielowden

(This essay originally appeared in the December 1990 issue of Friends Journal, a Quaker publication. Always the editor, I have made a few minor changes.) 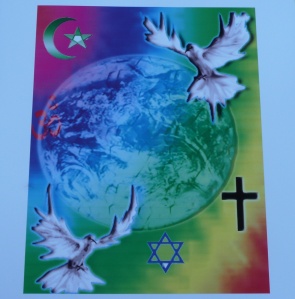 Last Christmas, I read an article headlined, “Is Nothing Sacred? Holiday Symbols under Fire.” It was just one of many similar articles surfacing in these contemporary times that dealt with the issue of differing beliefs during the holiday season.  However, this particular article struck me in a way most others did not because the story was right out of the 1947 movie Miracle on 34th Street. A little girl, whose mother had told her there was no Santa Claus, was telling fellow kindergarteners that the old gentleman didn’t exist. The teacher overheard her and asked her not to tell the other children because it was upsetting them. The child’s mother pulled the girl out of school on the grounds that her free speech was being compromised.

When I read the article I couldn’t help but wonder if the child would meet up with Kris Kringle and he would set her straight.  However, that was just a movie, and today’s pluralistic society is more complex than it was in the 1930s. We have among us immigrants from many countries with as many beliefs.  We need to be sensitive to those beliefs at Christmas time as well as throughout the year.

That said, I couldn’t help but feel sorry for this particular little girl.  Nowhere in the article did it say her mother practiced a religion that demanded non-belief in Santa Claus. Instead I saw something of myself and my generation in this woman’s non-belief.

Many of us who came of age in the 1960s vowed never to mislead our children with tales of fairies or elves. We were rebels and we questioned everything. Fairy tales were sexist, violent, or both and were to be avoided. Santa Claus, if discussed at all, was “just a story,” as this little girl’s mother explained to her. Children were taught to believe in what they could see—what could be proven to be true.

I raised my first child with many of these attitudes, and then promptly disposed of them with my second.  Why? It was when I was expecting my second child that I began a spiritual journey that led me to the Society of Friends. Along with my spiritual journey, I realized what I’d always suspected as a child, but had denied as a young adult, that some things worth believing in couldn’t be seen.  It was around that time in my life that I read in its entirety Francis P. Church’s memorable reply to the eight-year-old girl who asked if there were a Santa Claus. I knew in my heart he was correct when he pointed out that just because we can’t see fairies dancing on the lawn doesn’t mean they are not there.

Today I realize that reading fairy tales to my children and letting them at least pretend to believe in Santa—just a little while longer—serves another purpose as well. It gives them the ability to believe in things that are not but could be.  Many Friends speak of “envisioning peace,” and in today’s world this requires quite an imagination.  If we can envision peace in our future, we can have peace in our future. If we don’t have the imagination to be able to see peace that does not now exist we will be ill-equipped to make peace a reality.  Perhaps if our children are taught to believe in things that are not “real” but have worth—the Spirit of Christmas after all does exist, even if Santa technically does not—they will be able to not only envision world peace someday, but actually bring it about.

There is a fine line between sentimentality and honest emotion. Some might say that 1947 movie suffered from an overdose of the former.  I would suggest many children today suffer instead from an overdose of seriousness that blocks their ability to feel the latter. Friends are as guilty as any for fostering this seriousness—maybe more so—with our talk of world suffering and possible nuclear holocaust in our First-Day School classes.  It is in childhood, after all, when we learn to dream the impossible. As adults we need to tread lightly so as not to extinguish that ability in our children.

Addendum: I’ve been writing fantasy ever since!