Take Me Out to the Ballgame and Away from all this Snow!

It snowed again the other day: March 18. Alright already, enough! However, I know spring is nearly here, not just by the calendar, but by the fact that every day there’s a baseball story in the Sports section.  I was mildly interested in the World Baseball Classic, but let’s face it—the real season starts in April (except this year it’s March 31).  So, for this installment of children’s book reviews I’ve chosen two books with a baseball theme. They transport us back in time, when baseball was on the radio and night games were still in the future. Request them from your local library now so you can read them as the snow continues to fall outside your window.  These stories will be a sure reminder that indeed, spring is not far away. And that snow out your window will give way to green grass sooner than you think.

And don’t miss my next post which will review two more baseball books: Baseball Saved Us, a poignant portrayal of baseball played at Japanese internment camps during World War II and Bats at the Ballgame, another in the series of Bat (the kind that hang upside down) books by Brian Lies.

I first read this poem when I was nine years old.  It was in an anthology of poems and short stories we had.  I remember sitting on my bed on the second floor of our farmhouse, paging through the thick book.  There were many stories in this treasure, the name of which I cannot remember.  “The Happy Journey to Trenton and Camden” I found boring.  “The Gift of the Magi” nearly broke my heart. I felt so sorry for the couple giving up their most prized possessions.  I didn’t get that it was a joyful story of young love.  I was nine after all.

But Casey stuck with me.  Maybe because the Milwaukee Braves were the background music of my childhood summers.  WTMJ, like today, carried every game.  In later years baseball would mean something more to me.  I remember my dad cheering on the Braves that summer of 1957 when they won the World Series. He died suddenly of a heart attack the following summer. That summer I was nine.

I don’t remember if I read “Casey at the Bat” before or after my father’s death.  I just remember reading it and feeling sad for Casey, a fictional character in a most familiar situation. This edition of the poem, with Fitzgerald’s acrylic paintings, evokes a time gone by.  The illustrations are dream-like, as if these were photographs taken a century ago with a soft-focus lens.  Perhaps this is why I find this interpretation of Casey so compelling.  For me this book brings back those memories of childhood—both joyful and sad. But all readers will find this book an enjoyable reflection to a time long past—when baseball was heard exclusively on the radio and the crowds cheering in the background had to come to the ballpark to watch a game. And it’s sure to warm up a snowy spring day with its lyricism and visual journey to a simpler time. 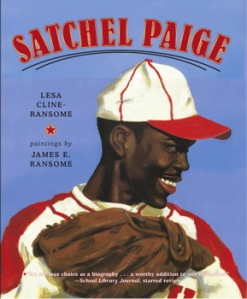 Committed baseball fans, those who love the game and not just their team, already know who Leroy “Satchel” Paige was: first black pitcher in the major leagues; first black to pitch in a major league World Series; first black Baseball Hall of Fame inductee.  But everyone may not know that when his mom “…needed a plump chicken for the evening’s supper, she’d send her Leroy to do the fetching…with a rock he could knock a chicken…out with one shot.”

The casual baseball fan may not know that to earn some much-needed money, Satchel, the seventh of twelve Paige children, headed to the train depot and earned “shiny new dimes” from people whose luggage he carried.  And because he’d “hang a half-dozen or so” on a stick his friends called him “Satchel.”

But Leroy got into trouble.  Shortly after his twelfth birthday, he was caught stealing and was sent away to a reform school for Negro children.   School was difficult but hard work agreed with Leroy. And the school had a baseball team.  This team was nothing like how he’d played baseball in the streets of Mobile, Alabama.  This team had real balls and bats. Six years later he came home and got a position on the black semi-pro team the Mobile Tigers. It wasn’t much money but it was enough to put food on the table for his mom and siblings.

Ransome explains how the white major league players were treated differently from the Negro league players. Some nights the black players had to sleep on the ball field because no hotel would have them.  But this life suited Satchel. He would go on to play with some of the best Negro league players: “Cool Papa” Bell, Oscar Charleston and Josh Gibson.

Although Satchel’s pitching arm was legendary, his demeanor on the mound was just as commanding. James Ransom’s oil paintings with vibrant colors and contrasts reflect the bravado of Paige’s personality.  In a painting in which Satchel is a giant against a perfect blue sky, the author explains:  “He had an odd way of pitching. He would stand tall and straight as an oak tree…his foot looked to be about a mile long.” Crowds loved his easy confidence and style, including his banter on the mound. “Why don’t you all have a seat?” He’d call to the outfield, “Won’t be needing you on this one.”

Satchel Paige played in his last professional baseball game in 1966.  His actual birthdate is unknown but he would have been about 60 years old.