Posted on January 22, 2014 by stephanielowden

I’ve been thinking about Sheri Sinykin’s recent book, Zayde Comes to live and why it resonates with me so. Zayde is a picture book about a little girl trying to understand what will happen to her grandfather after he dies. In turn, Zayde got me thinking about Kevin Henkes’ book, Wemberly Worried. On the surface one would think these two books don’t have much in common: a book about death and a book about worry. For me, though, they have everything to do with each other.

Let me start with a true story. When I was nine-years-old, my father died quite suddenly of a heart attack. I became terrified my mother was going to die next. That she had chronic heart palpitations that caused her to think she was dying did not help. For about two years after Dad’s death, if Mom happened to be sleeping when I was awake, I would get so agitated that I’d check to make sure she was still alive. Many times I woke her up just to be sure.

Many years ago, I had the good fortune to attend a presentation by Kevin Henkes. He showed slides of his work-in-progress at that time: Wemberly Worried. When he shared with us how he worried about everything as a child, it was easy for me to empathize. But one scene in Wemberly that Henkes projected on the screen caused such an emotional reaction in me, I found myself weeping. Wemberly, the tiny mouse who is the protagonist of the story, takes a flashlight and checks up on her parents while they are sleeping to “…make sure you were still here.” For that moment, in that hall, I was that nine-year-old child who insisted on waking  her mother in order to confirm she was still alive.

During a more recent presentation, titled “An Equivalent Happiness: Making it Out of Childhood,” Kevin Henkes stressed the obvious: that childhood is not by any means all fun and games. Most people remember a fair amount of hurt from their childhoods. But we are creatures of hope, and that hope carries us through to believe that sometime in the future, our unhappy days will even out with happy ones, thus the equivalent happiness.

Both Sinykin and Henkes understand and remember those fears and difficult times from childhood. These two talented writers bring a rich resource of literature to children’s lives. When the adult reader first sits down to read Wemberly Worried, she may not be thinking about how hard it is just to grow up. Wemberly, a child that worries “too much,” may seem like an anomaly. Isn’t childhood supposed to be carefree? But the adult reading this book will soon be reminded that, from a child’s point of view, the world is a new place, full of uncharted and scary experiences. A toddler dares to explore just beyond the reach of Mama, but quickly returns to her loving arms. A kindergartener fears the first day of school. An older child ponders what death means. Making it out of childhood isn’t easy. With books and authors like Sinykin and Henkes we can help our children on their way. And as adults, we will never tire of reading their books to our little ones because they resonate so much with our own lives. 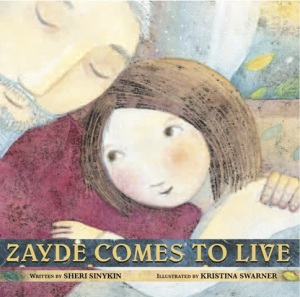 “Zayde comes to live with us. It’s because he is dying.” This forthright statement opens the story of a little Jewish girl whose grandfather has come to stay. It seems the opposite of what so many adults do when explaining illness or death to a child. Adults seem to think saying “He’s gone,” or “He’s sleeping,” is a more comfortable way to announce death to a child. But all such statements accomplish is to confuse children. The refreshing aspect of Zayde Comes to Live is that the ordeal of illness and death are described in a way that substitutes compassionate, truthful answers for confusion. Zayde can no longer play ball or hide and seek. Rachel watches him sleep “…to make sure he wakes up again.” Through Zayde and Rabbi Lev, Rachel learns that Zayde need not believe in Jesus or Allah to experience a peaceful transition between this life and the next. Rabbi Lev tells her, “He is living, Rachel, until the moment he dies.” Rachel thinks, “That doesn’t sound so scary.” Zayde tells her, “My spirit will live on…Because my love will stay here with you, and so will your memories. Always.”

Sinykin communicates her message with gentle care. She stresses this is not a book to simply hand off to a child. Rather it should be read by an adult at the right time in a child’s life when the need arises. Kristina Swarner’s illustrations created in linoleum prints with watercolor and colored pencil have a dream-like quality that perfectly complement Sinykin’s spare prose.

Wemberly is a small mouse child who worries about everything. She shines a flashlight on her parents in the middle of the night to make sure they are still there. She worries she might shrink in the bathtub. When Wemberly is worried, which is most of the time, she rubs the ears of Petal, her stuffed rabbit. Then she worries that Petal will have no ears left. “Worry, worry, worry…too much worry,” says Grandma, who wears a T-shirt that states “Go With the Flow.” Wemberly’s biggest fear is starting preschool. (New Morning Nursery School, a nice touch for residents of Madison.) Papa tells her he loved school, but Wemberly is afraid kids might make fun of her name, or she won’t be able to find the bathroom, or, “What if I have to cry?”

This picture book hits all the right notes with its simple portrayal of one of the most common fears of young children: starting school for the first time. Henke’s watercolor illustrations, so simple and yet so evocative, complement the text. Black ink inscriptions, apart from the text, further communicate different characters feelings and comments.

Whether starting pre-school, kindergarten or first grade, this is the perfect book for what can be a very scary time in a young child’s life.