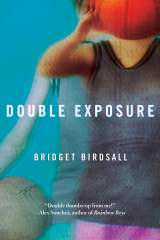 Alyx Atlas is fifteen, loves basketball and is moving to a new city. She is also an intersex person who desperately wants to hide her secret. Hoping for a fresh start in a new city, Alyx can’t shake what she calls “daymares” or memories of the past she just left behind:

“Part of me stands on the porch shaking; the other part is back there—again. Choking on blood, the sharp edges of my braces tearing the flesh inside my cheeks, my body folding in on itself. The convenience store door flying open and it’s Rafi, the owner, with fear in his voice. ‘You boys! I call police!’”

Back in California, Alyx grew up “being a boy” while knowing in her heart she was a girl. She was teased mercilessly for being a boy who wasn’t quite “all boy.” Having self-identified as a female from a young age, she had passed for a boy because her parents opted not to have her undergo surgery until she could make that decision herself. After being beaten up yet again, she asks her mother why her parents just didn’t “make me a girl” when she was born? That’s what parents used to do. She suspects that “Dad would’ve rather had a half-boy than a whole girl, right?” Her mother denies that, but her father has passed away, so Alyx will never know for sure. All she knows for sure is that she needs a fresh start in a place where she can be herself. Together, she and her mom decide not to tell her new school anything of her past. She uses a new last name. Now, she passes as a girl.

Living in Milwaukee with her mom’s family, she is determined to finally be the girl she always felt she was. She joins the girl’s basketball team and, from day one, it’s obvious she’s a great player. But another girl on the team, Pepper, has problems of her own. Pepper’s insecurity and jealousy cause her to do some digging into Alyx’s past. When Pepper posts an old picture of Alyx on the internet and the caption identifies Alyx as a boy, the whole basketball team’s chances for a state title are thrown into chaos.

Full disclosure: Growing up in a farm community, I lived a relatively sheltered life. Then when I was in my early twenties, I visited a photography exhibit of Diane Arbus’s work. It was the early 1970s. My first introduction to people called “hermaphrodites” was through that photo exhibit. I had never heard of this “condition.” Around the same time I learned of transgender people. The LGBT (now sometimes referred to as LGBTQIA) movement became well-known. But I never thought much about folks like Alyx, until I read this book.

This is a story of the power of love, friendship and being true to oneself. It helped me better understand the experiences and trauma intersex young people go through. It should be required reading for school teachers and administrators to better understand the needs of all students, even if those needs seem “odd” or “too different.”

Let me be clear. Everyone who cares about kids should read this book. But the most important audience for it are kids like Alyx who’ve suffered their own bullying and just want to be, as Alyx says, “Just like Dad. Dead. Dead. Dead.” Alyx’s story will give them hope and strength to know, that indeed, being true to yourself can make the slogan “it gets better” a reality. Bridget Birdsall has written an important book. But it is also a real page turner. Don’t miss it.