One Last Book for Summer Reading

Posted on August 14, 2017 by stephanielowden 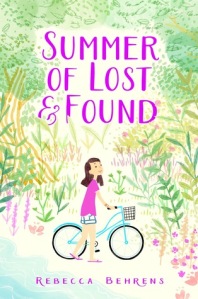 “You don’t expect your life to change because of a toothbrush. But that’s really how my summer of lost and found started, with one missing object.”

During the course of one summer, Nell Dare will become interested in solving several mysteries: Where did those Lost Colony people go? Why is her mother acting so strange? But most of all, why did her father suddenly run off to England? From the moment Nell notices her father’s toothbrush is missing until she meets an unusual boy who seems just as interested in solving mysteries as she, this middle grade novel is full of action and intrigue that entertains from start to finish.

After seeing the word separation on her mom’s computer, Nell is too scared to come right out and ask her why Dad has gone to England. But his disappearance has ruined her summer plans of staying in New York, taking tennis lessons with her best friend, Jade, and maybe meeting cute guys at the tennis court. Her mother announces that Nell will be accompanying her to Roanoke Island to help with her plant research. All the arguments Nell thinks up for staying in New York don’t budge her mother’s resolve.

Once on the island, Nell meets Lila, an annoying girl who thinks they should be best friends. After Nell snubs her, she meets Ambrose, a somewhat odd, but intriguing boy who also likes mysteries. Nell figures that if she and Ambrose can find enough clues to the Lost Colony, maybe her father, a mystery writer, will come home and write about it. But why does she get the feeling someone is spying on her? Is it Lila or someone else?

The end of the book includes an Author’s note, history of Roanoke, a section on Roanoke Today and an extensive bibliography for those wanting to learn more about the island and the lost colony. What I love about historical fiction is how it piques my interest in visiting intriguing locations, far and wide. Roanoke Island, with all its history and mystery, is definitely on my list of such a place.

I found this story particularly fascinating as my father, known for his telling of tall tales, once claimed his mother was a descendant of the Lost Colony. Probably not true, but one never knows…