Posted on August 25, 2019 by stephanielowden 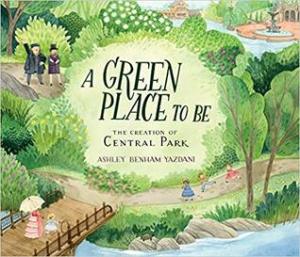 A Green Place To Be, The Creation of Central Park by Ashley Benham Yazdani. Candlewick Press, Somerville, MA, 2016, 2019.

“Central Park in Manhattan is green and growing and full of life. It’s a vibrant jewel at the heart of New York City, but it wasn’t always this way…”

So begins Ashley Benham Yazdani’s captivating picture book about the transformation of what was once swampland into what is now Central Park. The illustrations, done in pencil and watercolor, add to the fun of discovering each step along the way in the park’s evolution.

New York City was growing fast, “…but the people needed a green place to be. In 1858 in the city, only a few people had this luxury. If a park wasn’t made quickly, there might not be enough open space left for one.” Enter Calvert Vaux, an architect, who convinced city leaders to hold a design contest. Calvert intended to win the contest himself.

Calvert asked Frederick Law Olmstead, the man who had been appointed superintendent of the park, to help him come up with a design. A double page spread shows how the two men made a ten-foot-long drawing of their design. They even showed where rocks and plants should be and asked people who visited them to add grass. While the two men almost missed the deadline for the contest entry, they ultimately won the contest.

Another double-page spread shows the explosion of gun powder used to break up the boulders that riddled the area. One page is taken up with only three words: “Boom Bang Blam.” The background illustration is white clouds of smoke depicting the rocky explosion. These clever sorts of illustrations are sure to capture the eye and imagination of the young reader.

Calvert Vaux and Frederick Law Olmstead went on to create many more parks all over America. The last few pages of the book have short biographies of the two men, a bibliography and fun suggestions of things to hunt for in the drawings—including a pair of ghostly sisters who supposedly continue to haunt the park today!

It’s encouraging to see so many wonderful non-fiction picture books being published. A Green Place To Be , like Out of School and Into Nature (reviewed here in April) tells the story of people who, long ago, had a vision and pursued those dreams. Historical non-fiction when done well, like both of these books, can excite children’s curiosity and lead them to pursue areas of research they may not have otherwise considered.