Posted on February 1, 2021 by stephanielowden 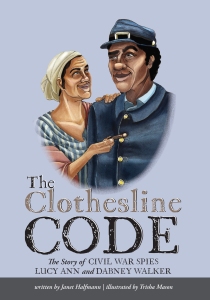 “Dabney stared up the hill, captivated by the Union soldiers waving red-and-white flags. Two soldiers took turns holding a long flagpole and waving the flag to the right and left, over and over again, with dash and flourish.”

Lucy Ann and Dabney Walker, along with their teenage daughter, Sarah, had escaped from slavery about a year earlier and were living and working in a Union camp in Virginia. Dabney had just been assigned to the intelligence unit of the camp and he was eager to learn how best to help the Union army. He asked the soldier with the flag what he was doing. The soldier showed him how the troops sent messages over long distances by using flags—waving them certain ways to represent letters of the alphabet that ultimately spelled words.  Dabney and Lucy Ann got an idea. They could send messages using laundry on a wash line—if they could get inside the enemy camp. Lucy Ann was the laundress of the Union camp, so they thought she could infiltrate the Confederate camp that was just across the river, pose as an enslaved person and use the wash line over there to send messages back to the Union camp. But Dabney hesitated. It was a dangerous plan and Lucy Ann would be in the most danger. She could be hanged if she were caught. But the couple had already endured hardship and danger when they escaped to freedom and Lucy Ann would not listen to Dabney’s objections.

Lucey Ann and Dabney had been forbidden to learn to read and write when they were enslaved, so they had to develop a system not based on the spelling of words. So, they came up with a different system. They chose a different colored shirt for each Confederate leader: Gray for General Longstreet, white for General Hill and red for Stonewall Jackson.  “Lucy Ann and Dabney plotted how they would move each general’s shirt to show a movement of his forces. Removing the gray Longstreet shirt from the line would signal that his troops had moved nearer to Richmond, Virginia. Moving Hill’s white shirt up the clothesline would mean his unit had moved upstream…and on and on.”

In order to get across the river, Lucy Ann posed as an enslaved person belonging to a Confederate woman going across to visit friends. She was successful. Once in the Confederate camp she blended in with the other enslaved men and women and used her skills as a laundress to accomplish her goal as a spy. The Walker’s plan worked like clockwork, until one day when Dabney did not hear from her. Several days went by. Had she been caught? Or worse, hanged?

This non-fiction picture book for older readers will fascinate any child interested in codes. But more importantly, Janet Halfmann is dogged in her pursuit of finding stories about real people who have been overlooked by history (she calls them her “Hidden History” stories) and making them accessible to children. This book, along with her books about Robert Smalls, reviewed here and Lilly Ann Granderson reviewed here do just that and are perfect selections for Black History Month.